After watching?the first episode of?Ride with Norman Reedus,?we were blown away by Roland Sands. His custom bikes were just incredible, so we looked up a little more information. 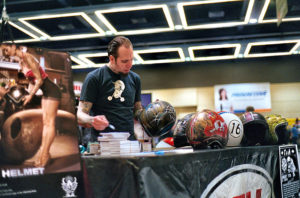 Californian Roland Sands received his first dirt bike on his 5th birthday. When he was 19, he attended California Superbike School, then went on to become a racer. He set many records in his ten year racing career.

Sands won a national championship with the American Motorcycle Association in 1998. He set track records at Daytona and Sears Point. He even participated in the British Super Cup series in 2000.

He then decided to pursue his love of bikes in a different direction. He participated in the Discovery Channel’s show Biker Build-off, which made him immensely popular.?He founded Roland Sands Design in 2005.

His bike designs incorporate elements of racing bikes and choppers. He improves braking systems, wheels, and other mechanics. Then he adds sleek but functional designs. His work is impressive!

He now works with major motorcycle companies such as Triumph, Harley-Davidson, and Ducati.

In addition to his custom bike designs, Sands also offers motorcycle parts and biker fashion. His clothes and accessories are stylish and practical. He even offers sleek biker armor and protective gear.

We think Roland Sands is an amazing designer. Now, who is buying us a custom bike for Christmas?

Where To Stay At Sturgis

Top 10 Reasons to Be a Biker