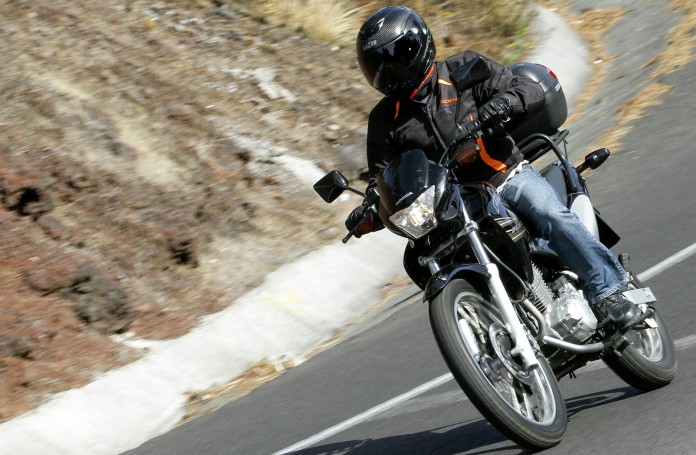 Many of you probably don?t need convincing to ride a motorcycle. However, for some of those potential bikers out there, we?ve compiled this list. Maybe you?re a biker, and you?re trying to convince you buddy or your wife to get a bike. Maybe you?ve been toying with the idea but just aren?t convinced. Maybe you?ve seen GothRider’s posts about biking and are intrigued.

Whatever the reasons, GothRider Magazine has you covered. Here are the Top 10 Reasons to Be a Biker.

There are some motorcycles out there that get close to 70 mpg! In today?s economy, with the regularly fluctuating prices of gas, wouldn?t you love a form a transit that gets well over 40 miles to the gallon? That?s just more money in your pocket ? or more money to spend pimping out your bike!

#9: Better for the environment

The smaller size of motorcycles actually means less natural resources are used in manufacture. Motorcycles are lighter-weight, which is easier on roads, according to the Department of Motor Vehicles. And when your beloved bike finally dies and has been fully scrapped for parts, it will take up way less space at the dump than a car.

Let?s be honest: does anyone actually look cooler than a biker? No one rocks leather better than a man or woman on a motorcycle. Add that to a pimped-out bike, and anyone can be as cool as James Dean.

You?ll look like a total bad-ass with a mask to protect your face while riding. Top off your biker look with some bling, and you?ll be a regular Daryl Dixon.

#7 No lack of conversation

Bikes are conversation starters. Period. Maybe it?s the special edition Harley that catches a stranger?s eye. Perhaps it?s custom upgrades you installed. Whatever it is, people will stop you to talk about your bike.

The conversation will give you a chance to brag about your bike. You?ll meet interesting people on your travels. Who knows?maybe the person who chats you up about your bike is the love of your life? Motorcycles are magical like that.

No other vehicle accelerates quite like a motorcycle. You know all those bikes that speed past your sedan in traffic? That could be you.

Even when you?re going the speed limit, you will feel like you are going so much faster. Weave past Sunday drivers. Get your errands run faster. See the world at top speed. The adrenaline rush will do you good.

Bikers love other bikers. The sense of community that comes with owning a bike is priceless. From charity rides to meetups, you will meet some amazing people with whom you would not have crossed paths otherwise.

A good biker friend of mine said that the motorcycle community is the most egalitarian community he has ever had. Bikers are welcoming and treat you like an equal. What more could we ever want in our friendships?

There is no greater feeling of power than being on a motorcycle. Too often in our lives, we feel powerless. Hell, sometimes even your car in traffic makes you feel powerless. Motorcycles are different.

There?s a reason bikes are called steel horses: they bend to your will like a beast. You control every turn, every acceleration. You bike doesn?t talk back. The power trip is good for the ego.

On a motorcycle, your senses are heightened. There is no car as a barrier between you and the outdoors. Operating the bike requires a higher degree of mindfulness than a car.

Once you have that relationship with your bike, it is just you and your thoughts. The solitude strips away the stresses and worries in life. It?s meditation at high speeds. Nothing will clear your mind faster than a ride.

#2: A sense of adventure

Road trips are epically more awesome on a motorcycle. In a car, you have to hope you?re in the right seat for the best view. On a motorcycle, you get every view.

Go to shows all over the world and meet interesting people. See crazy sites and tell some great stories. There?s no limit to your adventure on your bike.

And the best reason to be a biker is…

It?s you and your bike. No walls, no seatbelts. There?s nothing holding you back. Biker life is about freedom?freedom to explore, freedom to be alone, and freedom to be yourself. Isn?t that all we really crave in life?

Bikers, why do you ride? Wannabe bikers, are you convinced yet? Sound off in the comments and Twitter. #WhyIRideWednesday

What Do You Love About a Biker Bar?

What Should You Think About While Planning Your Motorcycle Trip?