As the haunting season of Halloween approaches, you might just have the opportunity to prove how badass you are.

Would you dare travel along these roads, or visit these places with reported hauntings?

Better yet, would you extend your ride while you’re there and stay at one of these bed and breakfasts?

Perhaps while you?re enjoying a nice ride you realize you?re stumbled across what?s said to be the ?most haunted road in America?.

In addition, the road comes with a dead man?s curve.

As a result, do you speed up? Or turn around and ride the opposite way? Maybe you’d rather wait and see if you can validate what others have found?

This 10-mile stretch has haunting reports.

Take note?or speed up, slow down, depending upon how daring you want to be?while you?re on the Ghost Boy Bridge. What’s especially relevant is that stories report the spirit of a little boy lives underneath it. Seems like he might try to draw you into the water for good.

In addition- Do you want to park your ride and take the time to explore the paranormal a little further?

With a plethora of haunting and paranormal, Gettysburg has been named by many as the most haunted place in America. Therefore, they have?tours galore.

As a result, you can choose to go to the extreme and do some ghost hunting, or conduct your own paranormal investigation.

Or, if you?re just up for a good ghost story, you can listen to tales while you raise your brew at a pub crawl.

Furthermore, Just How Many Winks of Sleep Would You Get in These Horrifyingly Haunted Houses?

On the morning of June 10, 1912, the Moore family, as well as two houseguests, were found bludgeoned to death. Investigators determined the murders took place?during the midnight hours with all the victims, but one, asleep at the time.

Lena Stilling was found lying crosswise on the bed with a defensive wound on her arm. While several suspects were named and tried for the crimes, the case is considered unsolved.

Most noteworthy, you can stop for a tour?or stay the night.?

In 1892, Lizzie Borden?s father and stepmother were murdered with an axe. Though technically unsolved, Lizzie is widely considered to be responsible for the murders.

Lizzie was tried and acquitted. Nobody else was ever charged for the murders.

In addition, Lizzie remained in town for the rest of her life, living ostracized by the Fall River community.

Sounds like a lovely place to stay for a bed and breakfast.

In conclusion, one can?t think of the author, Stephen King, without shivering from a chill.

The hotel is said to be haunted by the ghost of a housekeeper who suffered an electrical accident in 1911. Furthermore, it?s said that to this day, she “takes special care of the people” who stay in room 217.

Show off your own badass self?and scare away any other haunting entities?with this 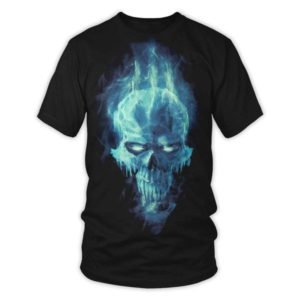 Have you ever stayed at a haunted house? Would you?

Two of These Rides Have the Halloween Vibe

Sexy Tattoos for the Biker Chic