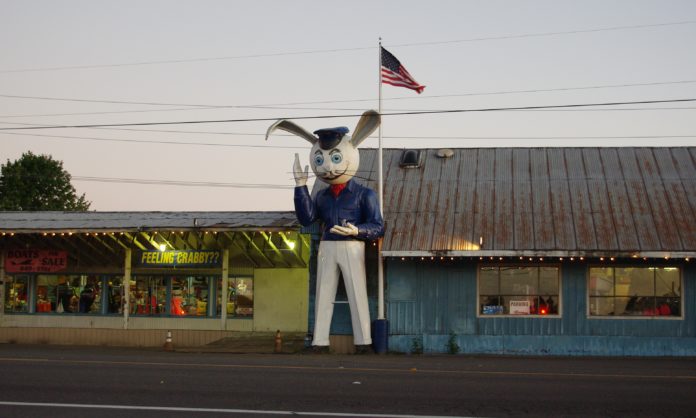 If you’re planning a motorcycle trip to the Pacific Northwest, you definitely need some crazy roadside attractions along the way. As always, GothRider Magazine has you covered.

There’s no shortage of Bigfoot sightings in Washington State. Some hardcore believers think he was wiped out in the Mount St. Helens eruption of 1980. However, a 28 foot statue of the Sasquatch is ready for photo ops.

Kid Valley has some other great roadside stops, too. There is an A-frame house that shows how devastating the volcano was. You can also stop at the North Fork Survivors Gift Shop.

Seattle is an all-around fun city. But one of its quirkiest attractions is the Giant Shoe Museum. Located in the Pike Place Market, the “museum” is little more than an exhibit case.

The owner came into possession of 1 shoe belonging to the Tallest Man in the World. In his hunt for the other half of the pair, he became obsessed with giant shoes. If you put in 50 cents, you can see the world’s largest pair of shoes…and you know what they say about big feet! (They come with big hands.)

Built in 1918, this replica is the first Stonehenge replica in the United States. The creator, Sam Hill, meant it as a memorial for World War I. He mistakenly thought the original Stonehenge was used for human sacrifice, and he tried to wax philosophical with his creation.

The replica is made with large concrete blocks enhanced to look lumpy and natural. But beware: this area is known for deadly wildfires. Catch it along the scenic routes in the area.

Harvey the Giant Rabbit, Aloha, OR

A little bit creative, and a little bit creepy, Harvey has a bit of a cult following from passerby. Originally a fiberglass statue of Texaco Big Friend, Ed Harvey was commissioned to repair the statue. The owner never returned.

So, Ed turned it into a 26 foot rabbit statue after the movie?Harvey with Jimmy Stewart. Because why not? People write letters to the rabbit statue and honk as they pass by. The FBI even used it as a rendezvous point in the past!

If you are in Portland and want to connect with your inner child, head to Kidd’s Toy Museum. It’s a small, unassuming museum off Grand Avenue. They don’t advertise, so this is a great spot away from crowds of tourists.

The museum features rooms full of antique toys. Some are offensive and would never be made today. That’s part of the fun! The owner, Frank Kidd, has even more toys not displayed. It’s a great, free attraction.

Who wouldn’t want to see the largest hairball to ever be coughed up by a pig? The hairball is the most popular exhibit in the Mount Angel Abbey Museum. It’s the size of a football.

The museum also features random religious iconography, typically in the form of replicas. You can also see a fair amount of taxidermy and other eccentricities. The monks are friendly and encourage you to snap pictures.

What are you favorite roadside attractions in the Pacific Northwest, GothRiders?

Five Haunting Places That Will Make You Extend Your Ride

What to Consider Before Getting that Fabulous Tattoo