The Harley Davidson motorcycle company is considered a symbol of Americana. A company founded from a dream and determination. The new documentary, Harley & The Davidsons provides the chance to learn about the roots of this amazing company.

The 3-night mini-series,?Harley & The Davidsons,?aired on September 5th, 2016 on the Discovery channel. The show is based on a true story from the turn of the twentieth century. The scripted series provides an entertaining education about the birth of the Harley Davidson motorcycle.

More than a Documentary?

First of all, the show isn’t just a history lesson. The entertaining story highlights the beginnings of the Harley Davidson company. You get to know the people behind the product. Brothers Walter and Arthur Davidson, and their friend Bill Harley, have one desire. That is to bring their passion to life in a motorized bike.

Furthermore, the show provides the chance to understand the risks these men faced. Hence we acquire a greater appreciation of the bikes we enjoy today. Real world struggles, and limited resources to fund their dream, didn’t stop them.

Chasing Their Goals & A Dream?

Most of all, The Davidson brothers, and Bill Harley, fought for the American dream. Furthermore, they built their company from the ground up. The show portrays the timeless traditions and heart of Harley Davidson.

Interested in a peek at what the Harley & the Davidsons series entails? Take a look at the?Official Trailer on YouTube

Do you want to proudly display your American Pride? This Gothrider?t-shirt?features a classic motorcycle and honors a timeless tradition. 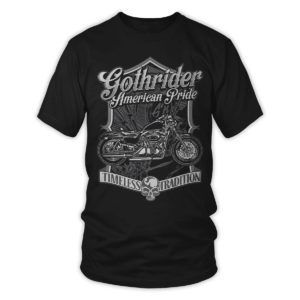 Have you watched the Harley & the Davidsons mini-series yet?

Chime in and share your thoughts about the show in the comments!

Have You Seen These Five Awesome Motorcycle Movies