For today’s Why I Ride Wednesday we’re featuring an iconic sitcom motorcycle dude we called, ?“The Fonz.”

Cast as Arthur Fonzarelli in the 1970?s sitcom Happy Days, but we all knew him as ?The Fonz?, or ?Fonzie.?

What made, “The Fonz”, cool? Maybe because he got all the girls. Perhaps starting the jukebox with a thump of his palm, or a snap of his fingers, impressed us.

We had one certainty. When Fonzie walked into the room, clad in jeans, a white t-shirt and leather jacket, the current crisis was resolved.

It seemed like any problem could be solved with a meeting in Fonzie’s ?office?. Most noteworthy, the bathroom of Arnolds. Complete with a payphone, and the friends he stuck with through thick and thin.

We all wanted to be the cool guy riding in on the Triumph TR5 Trophy motorcycle. Or we longed to be the girl hanging out with The Fonz. Since when you were Fonzie’s gal, he treated you with respect.

Consequently, there are a few things you might not know about this iconic character whose story lived on long past the show?s conclusion. (1974-1984)

?You see I don?t know how to ride a motorcycle, actually.?

The Fonz portrayed dudes in leather and motorcycles as all-American, wholesome, stand-up guys.

If you live to ride, you can show it with pride with this gorgeous?Live to Ride, Ride to Live Stainless Steel Necklace?by Gothrider. 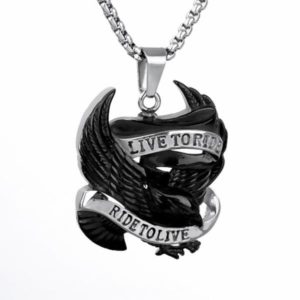 In Gold Plated, Silver or this unique Black- you’ve got to check it out. This badass necklace is getting awesome reviews.

Who else loves the Fonz?