The Headless Horseman. Most people who are familiar with American folklore will recognize the name of the terrifying fictional character from the story The Legend of Sleepy Hollow

Now we’ve already showed you some pretty frightful things to think about this time of year when you’re on a ride, so why not one more?

Despite being written centuries ago, and recounted similarly in German and Indian Folklore alike, the plot is revived with a few tweaks. Now in popular culture the horseman?s steed has become a motorcycle.

We can?t say we weren?t surprised?we all know motorcycles are badass.

The headless horseman has ditched the horse for the speed of a motorcycle.

Why? Because not much is more frightening than the thunder of a bike ripping down a dark path. Except for maybe a headless biker trailing you. (Most likely Ichabod would be even more terrified.) 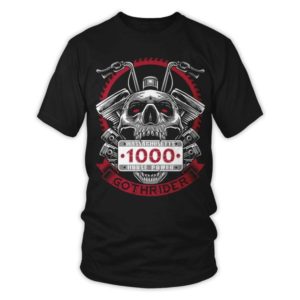 Make others tremble in fear at the roar of your bike when you ride in wearing your own 1000 horsepower Gothrider T-shirt.

So what is scarier? Would you rather encounter the

Headless Horseman on a Horse or a Motorcycle?

Why Should You Ride a Motorcycle?

What Do You Love About a Biker Bar?

Have You Seen These Five Awesome Motorcycle Movies